What’s the awesome-est Halloween party you’ve ever been to in your life? Let me guess, a wedding reception is not your first response? Well, that’s probably because you’ve never been to an awesome Halloween-themed reception! I’m here to tell you all about Morgan and Brendan’s big day. The wedding was normal, but the they went ALL OUT for the party. Decorations everywhere, the venue covered in spider webs. All of the food had spooky names and descriptions. Everyone was in costume.

Get this, even the save-the-dates, were severed plaster fingers with ribbons tied around them. (tie a knot around your finger so you don’t forget…get it? Except in a really morbid way).

The reception was at 409 S. Main in downtown Memphis. The venue was perfect for the reception setup, which was complete with a live band; flowing drinks; food that consisted of Gus’s fried chicken and some ribs (aka. smoked body parts); a “Trick or Treat” station; an awesome photo booth; and even A PALM READER!

Here is the Trick or Treat candy station as favors! 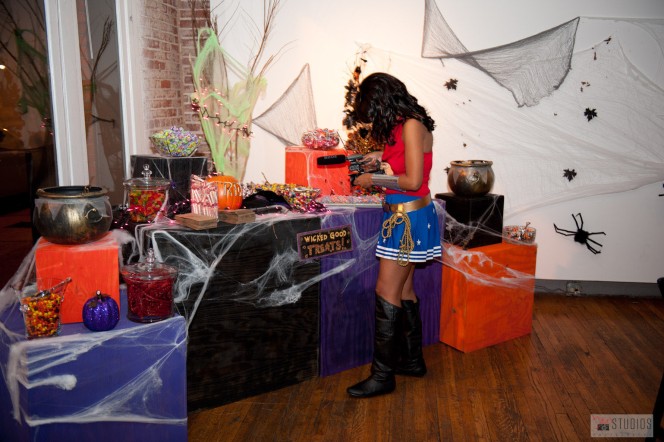 Of course everyone was dressed up in their Halloween attire, including the photographers/videographers and the band.The bride and her bridesmaids were flappers and the groom and his groomsmen were zombie gangsters. FOB and MOB (father and mother of the bride) were Batman villains, Poison Ivy and the Joker.

Below was the FOB and the bride posing together at the photo booth.

Below are just a few other hilarious photo booth pictures. Imagine the possibilities!

Lucy and Ricky Ricardo! A nun and a priest. Gangsters, Sock Monkey & Raggedy Ann? The world is your oyster!

Your pictures would be fun and memorable. Like your first dance staring into your new spouse’s zombie eyes!

Or like your father-daughter dance goofy and happy, maybe a little spooky. Kinda like real life, right?

Don’t get me wrong. A Halloween-themed reception is NOT for everyone. But if you’re all about the party and dressing up for Halloween is a BIG tradition in your family…you won’t regret all the fun you can have with decorations, costumes, food, music…and so much more! Cough cough, this zombie cake topper for example. 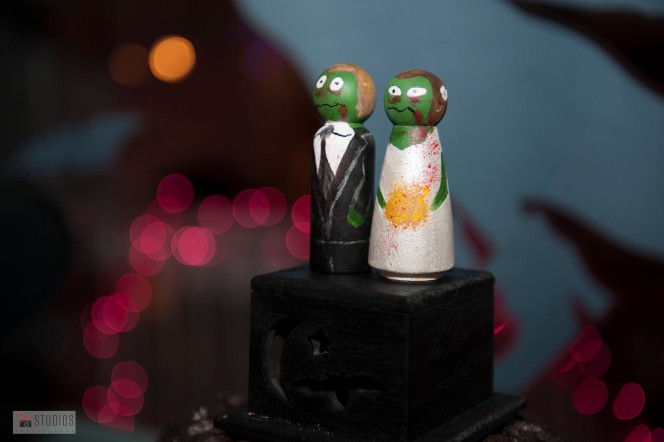 Imagine not having to play by the wedding rules…better yet – creating your own rules! A reception like this can work for you! Just have fun and make some memories.

I'm not going to lie. I used to really shit on ph

Put a bird on it. #putabirdonit #christmas #portl

In case you were wondering how I feel about the ab

Have you ever been to a tarot card reader?? Well